the first Easter ... it started out sad - but ended in VICTORY!

15 that whoever believes in Him should not perish but have eternal life. 16 For God so loved the world that He gave His only begotten Son, that whoever believes in Him should not perish but have everlasting life. 17 For God did not send His Son into the world to condemn the world, but that the world through Him might be saved.
18 “He who believes in Him is not condemned; but he who does not believe is condemned already, because he has not believed in the name of the only begotten Son of God. 19 And this is the condemnation, that the light has come into the world, and men loved darkness rather than light, because their deeds were evil. 20 For everyone practicing evil hates the light and does not come to the light, lest his deeds should be exposed. 21 But he who does the truth comes to the light, that his deeds may be clearly seen, that they have been done in God.”
John 3:15-21
Posted by Saija at 6:49 AM 3 comments:

leo and i watch "tv church" ... leo isn't able to go sit in a pew for a service, so we get our fellowship where we can! ... charles price, from people's church in toronto, is our tv pastor ... just thought i would share a few quotes from today's message ...

You see, sometimes the very thing the devil would use to destroy you, IS the VERY thing God uses to build you and bless you. 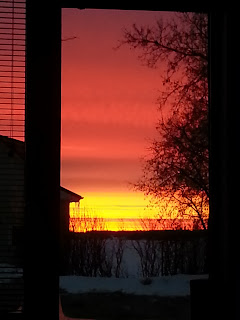 it's absolutely about time i wrote something!!!!  my poor neglected blog, eh ...

actually i've had problems posting pictures ... a few times i was going to write something but i cldn't get blogger to cooperate with a visual ... so i thought i would try posting from the laptop - and look at this - it worked!  my "big" computer is just not jiving  with blogger ... ? ... but i don't mind working around a problem - if that is doable ... just a life lesson -  sometimes you go around the mountain, if you can't go through or over it ... *grin*

check out this sunrise from a few weeks back ... i was sitting on the couch just amazed at God's workmanship ... it seems so personal when no one else is stirring and i seem to be the only one  who is seeing the beauty of the morning ... i sit and smile and talk to my Heavenly Father ... feeling so blessed, even though life on earth can have it's hard spots - yet God reminds me that the best is yet to be ... i will enjoy my time here, share what i've learned and leave everything else in the Hands of HIM who was there in the beginning and will be there always!
Posted by Saija at 4:17 PM 6 comments:

Saija
redeemed child of God; wife, sister, but not a mom; avid reader, digi picture taker; married 48 years to leo, who has had arachnoiditis for 3 decades (2 failed back surgeries - chronic pain); a seeker of truth; a lover of quiet solitude; comfortable in my own skin.